About
Our Story
WE ARE RON.

Ron is a boy from a working-class family out of Beckemeyer, Ill. He paid his way to college building silos and bagging groceries as a high schooler (even though his guidance counselor told him he would never make it). After graduating from SEMO, Ron enlisted in the Marines. He worked his ass off again when he joined corporate world, though he decided to trade in his suit and tie for a pair of coveralls and buy a gas station on I-57. That was 1977, and that single gas station turned into 15 because Ron's philosophy was “friendly, fast, and clean.” Even though Ron worked harder than hard and hired the good ones, some of those gas stations didn’t sell so much gas. So Ron, Mitch, and Joe had a meeting. They decided that smoke shops should replace the stations that weren't pumping fuel.

One Stop Smoke Shop & Liquor was born, and Ron's philosophy made headway in the smokes and liquor business.

We did a good job—so much so that other folks began using our name! The lawyers said the One Stop name couldn’t be trademarked, and that's when I decided to take a chance at a change with the name RollnUp Smoke Shop & Liquor. Why RollnUp? You can roll up to one place to get your super cold beer, your loyal liquors, your favorite chew, your roll-your-owns.…ok you get it.

RollnUp is Ron: hardworking, down-to-earth, funny, smart, and friendly. Just like Ron, we take pride in our country, community, and our RollnUp family. Ron passed away on August 10, 2012, but you can see him over our shop doors, and we share his sentiment when he says “Appreciate You.” 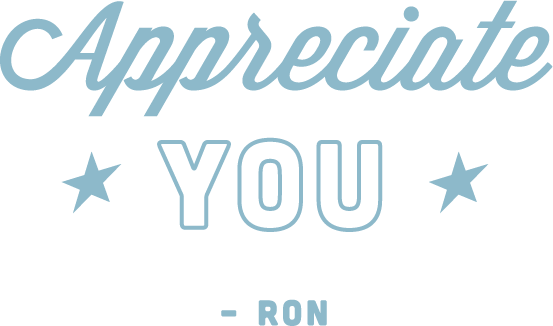